Hello everyone and welcome to Otaku Thursday! So today, I thought I’d do a fun post inspired by one of the questions on The Sunshine blogger nomination post. That question was simple but entertaining: if you could swap any two protagonists, who would you swap? Well, I immediately thought about two boys who carry around notebooks—Izuku Midoriya and Light Yagami. So let me share with you this strange explanation of why that’d be so hilarious in my opinion. 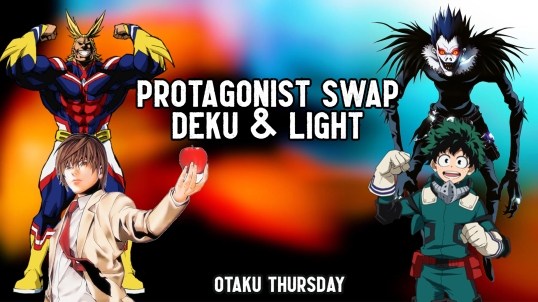 So first off, let’s start with Izuku and drop him into the world of Death Note. Now, he is a character that has a strong moral compass from the get-go, and who always wanted to be a hero. So what would happen the minute he got his hands on the Death Note? Would it be the villain AU Deku that so many fans wrote fanfiction of? Probably not. But I think it’d be damn interesting. I can see Deku not wanting to use the Death Note at all, and for a very long time. Most of the anime would probably be him trying to decide what exactly to do with it. But I think it would be interesting to see him struggle. To see him hear about all the bad in the world and see it firsthand and be powerless to stop it. A world where there was no All Might or heroes to save the day. I could see Deku falling slowly into using it. Like there could be an entire season leading up just to his use of it, but one day he’d have no option but to. And who knows? Maybe he, like Light, would realize it’d give him the power of justice. The power to be a hero if he used it right.

Now, I don’t think he’d go as batshit crazy as Light did, but I think that using it would create an even greater moral dilemma for Deku that could be interesting for his character. Is he a hero? He’s saving people but does that count as being a hero? Or is he more of a villain now? But what happens if he stops using it? Who is there to save the day? I’d love to see him muttering these questions to himself after his first use of the Death Note. I’d 10/10 love to see this internal struggle. I could also see a tragic ending in which he destroys the Death Note, perhaps writing one final name in it before it burns.

Now flipping over to Light. I think dropping him into My Hero Academia would be SO entertaining. If he were given One for All, I could imagine him tricking All Might for the entire show. Just like with the Death Note, Light would get drunk off the power of One for All and he’d probably aspire to be the number one hero in place of thinking of himself as God. After all, in the super-human society, he would have the most influence as the number one hero who everyone knew of and most people looked up to. More importantly, I could TOTALLY see him and Bakugo not getting long in a whole different way. I bet Bakugo would see through Light—I could see him being suspicious of his motives the entire time and thus creating a rivalry and hatred. And Light would be trying to fool him like everyone else. He’d still be a natural leader within the class, inspiring despite his motives, and cunning beyond belief.

Something I could see that could be interesting is actually Light working WITH the villains in his ploy to become number one. Imagine if the Summer Camp arc was orchestrated by him and that everything that came after a direct result of his cunning? Like damn he might be the best villain in history at that point. It’d also be interesting to see him learn about All for One—and knowing Light, he’d probably desire to have that too. I bet it’d turn into a game for him on how to trick All for One to gift him his own quirk. The best part about this alternate world though would be the inevitability of Bakugo finally trying to expose Light. Then it would be a question of, does he succeed and does Light become a villain that the heroes must defeat? Or does Light succeed and become the most twisted number one hero in existence? It’d be super interesting to see how the series would change with Light Yagami in the lead.

So there you all have it. My two odd-fanfiction-esque explanations on why I think a protagonist swap between Izuku Midoriya and Light Yagami would be really interesting. Overall, their personalities would totally change the anime they got swapped into. A Deku version of Death Note would almost seem like a drama-tragedy, meanwhile My Hero Academia would go from heroics to villainry. Both, I think, could totally work.

Anyway, that’s all for today! Would you guys watch either one of these protagonist-swapped anime? Or even better—what protags would you like to see switched? Let us know in the comments below! And let me know if you’d like to see more posts like this! 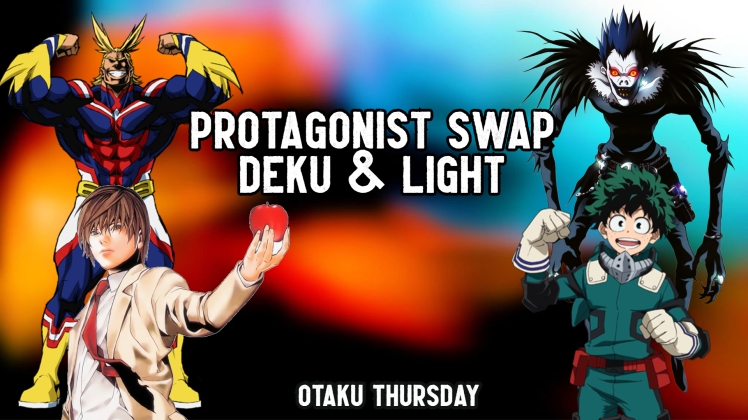