Welcome back to Otaku Thursday!

Today I’ll be talking about something that I…well I’ve been dreading (and attempting to put off). Today, I’m going to be deciding my top 5 anime of spring 2019, and let me tell you—this season made it so hard. There was actually a handful of good anime, and I’ve been using the past few weeks to go over each carefully to figure out which was the best. And I finally came to the conclusion there was no way I could make this list and represent the universal best anime of the season, so I’m just going to go with my favorite So without further ado, let’s get into it.

Coming in at number five is the anime that I thought was the front runner at the beginning of the season. Carole & Tuesday looked like the most amazing thing. And you know? It’s pretty damn good. Its artwork is amazing, the music is lovely, and the characters are endearing, but the plot? Well, it’s good but it starts to get pretty…typical. It started out really strong but the back end of the season started to feel a little…boring. It was more or less a glorified American Idol arc, which was fun but also not the most entertaining to watch. While I appreciated that we actually got to see everyone perform, I thought the performances all lasted just a little too long. Overall, it was a definite stilt in the overall anime, so even though Carole & Tuesday was one of the better, it only just barely squeezed by Fruits Basket.

Yes! Dororo is once again hitting this top five list. Its first half made it a stand-out anime in the winter season, but it was it’s second and final half that really made Dororo shine. It started getting into the true struggle at the heart of the show—showing how the people of Daigo’s land relied on their prosperity, and how Hyakkimaru getting his body back caused more turmoil for the many. The question of one life in exchange for many (essentially the ethical trolley problem), really hit home near the end of the season. Cue that with the animation of Dororo and some kick-ass music and Dororo is an instant fave. It did lose some points for a particularly badly animated episode (I think it was 16), along with some weak story choice near the end. But overall? Super good, and I’m actually nominating it to continue on to the best multi-seasonal anime bracket (which essentially gives it another chance at best anime of the year). 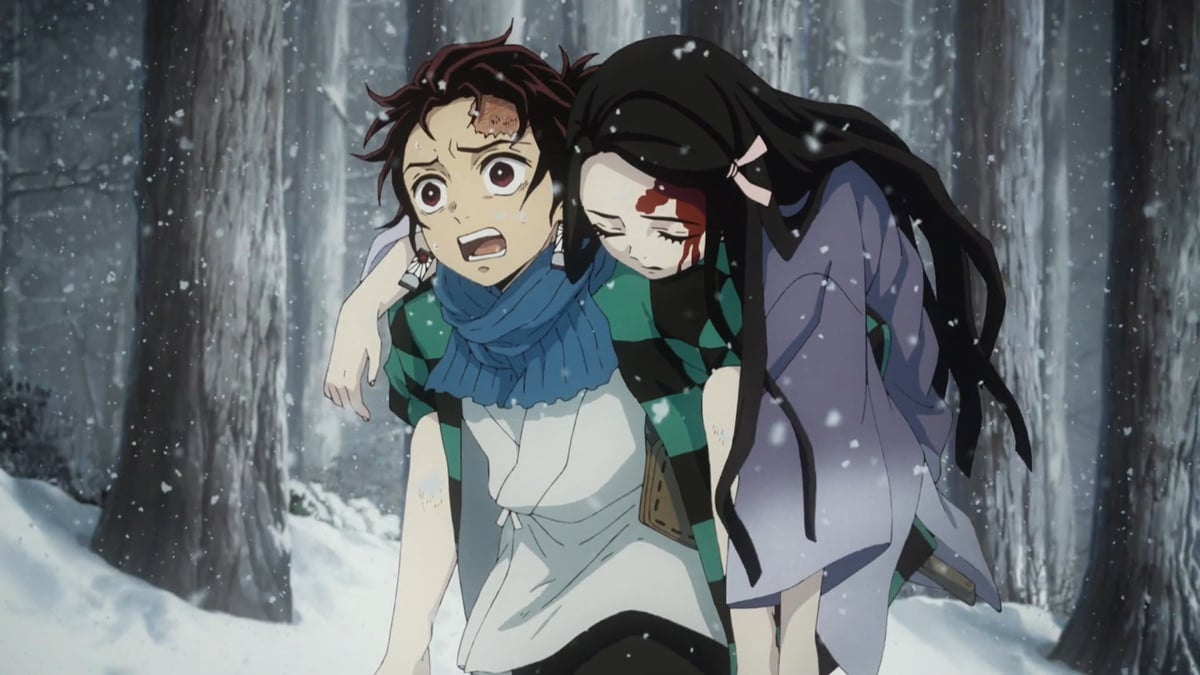 This is it. This is the quintessential shounen anime of the year. Kimetsu no Yaiba came in strong this season and garnered support from manga fans as well as those who were just introduced to it. So far, it has everything a good shounen will—which both works in its favor as well as kind of bogs it down. While there are a lot of lovely little details about Kimetsu no Yaiba, the truth is that a lot of its story isn’t groundbreaking, but it’s still excellent. And I’ll admit, it does have it’s own little quirks. For example, the characters are pretty damn endearing and I–well, I love them. Plus you can’t deny that this anime has some really solid and consistently good animation. Couple that with a great OST? Yeah….yeah this really is going to be the next big shounen hit. But at the end of the day, it’s still just a shounen hit.

I’m actually laughing at myself and also cursing myself for AOT’s placement on my list. Why? Well, to be honest, I was never a huge fan of it. Despite the immense hype the first season got, I wasn’t really on board. But it’s okay guys. Because Attack on Titan is AMAZING guys. Like truly, wholeheartedly, Season 3 part 2 is a good example of truly good anime, and those are words I thought I’d NEVER say about AOT. The first season of AOT relied on thrills and shock for its substance, the second relied on a slower storytelling aspect, and the first half of season 3 spent its time with expanding the world and lore. And this season? This season contains all three elements put together and made into a truly wonderful experience. The anime has now extended far past simple titans versus humanity, and it has shown true brutality, tough and heartwrenching choices. and consistently good animation and ost. I honestly can’t believe I’m saying it, but I think AOT season 3 part 2 also deserves to move to the multiseason bracket. This season has me feeling the hype for it that I never did before.
1)­ Sarazanmai

I KNOW. I KNOW IT’S CONTROVERSIAL. When you look at the other amazing anime on this list, hell in this season, and look at Sarazanmai you might be confused. How can an anime about kappa boys, sexy cops, and too many butt jokes to count, possibly be best of the season? Well, after long consideration I have my reasoning. First of all, Sarazanmai is unique from other anime on this list by which it is neither a continuation nor half of a much longer season. The story, while a bit messy, is contained within the 11 episodes it airs for. More importantly, this anime is probably the most unique anime of this season, and certainly on this list. While alarmingly absurd, it certainly is a concept that is sure to stick with you. Sarazanmai also has absolutely wonderful animation and direction. Every moment is visually stunning, and a lot of the sequences are unique to look at (though it is clear sequences are reused), and also very stylistic. From the otter song having DDR like background graphics to the magical girl-esque kappa transformation sequence, every moment feels flavorful. Then we have the music—while perhaps not epic, the OST is actually really solid, as are the opening and ending sequences. The characters are also pretty damn endearing—we’ve got Enta, the troublesome (yet somehow loveable) idiot; Kazuki, the crossdresser-with-a-brother-complex; and Toi, aka your troublesome fave and criminal child. Throw in two gay cops, a kappa prince that’ll make every moment a meme, and a cute kappa girl, and we have a cast that is entertaining and unique. But then we get to the problem part of the anime, which is what really caused me turmoil over giving it number one—the story and pacing. This anime goes by really fast, and it has some plot points that are never explained fully or not even touched upon (the cops storyline probably being one of the weakest, second only to the backstory of the kappa kingdom and the otters). But y’know, despite that the story it was telling was actually done fairly well. Because at its heart, Sarazanmai is about connecting and wanting to connect with others. And it’s about all the obstacles we have to get over, internally and externally, to allow ourselves to truly forge a connection. The anime showcases the many ways in which we connect to. For instance, by letting go the boxes we carry around and sharing them with others, no matter how shameful. By confronting and acknowledging our past, by being able to sacrifice for each other, and to be able to try to truly understand someone even when they change. These things might be done subtly in Sarazanmai, but they culminate into the thesis of Sarazanmai. There are a million reasons why you would want to connect but you couldn’t, but if you truly want to connect you’ll keep trying. And maybe things would fall apart one day, or maybe they won’t. But only with the desire to connect can you truly forge a bond. This lesson, this solid bit of storytelling is something that I think truly stuck out to me about Sarazanmai. Because despite it not going deeper on so many things, it went REALLY deep. It managed to go from humor to drama to hope. And it did so with some standout animation and music….and a lot of sex jokes. Honestly, I can’t believe this is my number one with how TMI this is. And there’s so much more I can say about this anime after watching it through, but that might be a different post. For now, this hits across the board and does so in a unique and self-contained season. So while I know others may not agree with me, Sarazanmai is going on to be the second anime nominated for Best Anime of the Year.

That’s all for now! This was super hard and super long to write. But we have one solid nomination and two that will get a chance at nomination upon further review. In case you’re wondering, the best multi-seasonal anime will be ranked at the end of the year, and the winner will move on to be considered in the best anime of the year. ANYWAY, that’s it for now! What was your favorite anime of the season? And what did you think of Attack on Titan? Let us know in the comments below! Til next time!