Luna back with a first impressions (in an attempt to put off having to pick my top five of the season). Today we’re going to be looking at Bungou Stray Dogs, Seasons 3. So without too much chatter, let’s get into it.

Bungou Stray Dogs has always been my favorite. The first season was good, and the second season’s first half was GREAT (honestly that Dazai flashback arc was everything). So, naturally, when I heard Bungou Stray Dogs was coming back for a third season, I knew I was going to watch it. And so far? I’m fairly pleased.

As far as BSD season openers go, I’d say this one was probably the second best. The first season being the weakest link in my opinion. This season, much like the second, begins on a Dazai flashback. Whereas the last one told the tale of the OG Stray Dogs, this one introduces a young Chuuya to us alongside a young Dazai. This formula of beginning the front of the season with flashback is something that I think just…works. It’s a strange concept, as many flashback heavy anime can get boring or irrelevant—and it’s always a huge gamble to frontload a season with a multi-episode flashback arc. But I think it really works in this show. This season, for instance, fills in missing pieces that are mentioned in the prior and does it in a way that doesn’t interrupt the action of what is currently happening. I can’t even begin to tell you how many anime/movies/tv shows get ruined by placing an intrusive backstory within the action and not just pulling the viewer out of the current situation but also possibly losing their interest with something that seems drawn out or isn’t nearly as interesting. 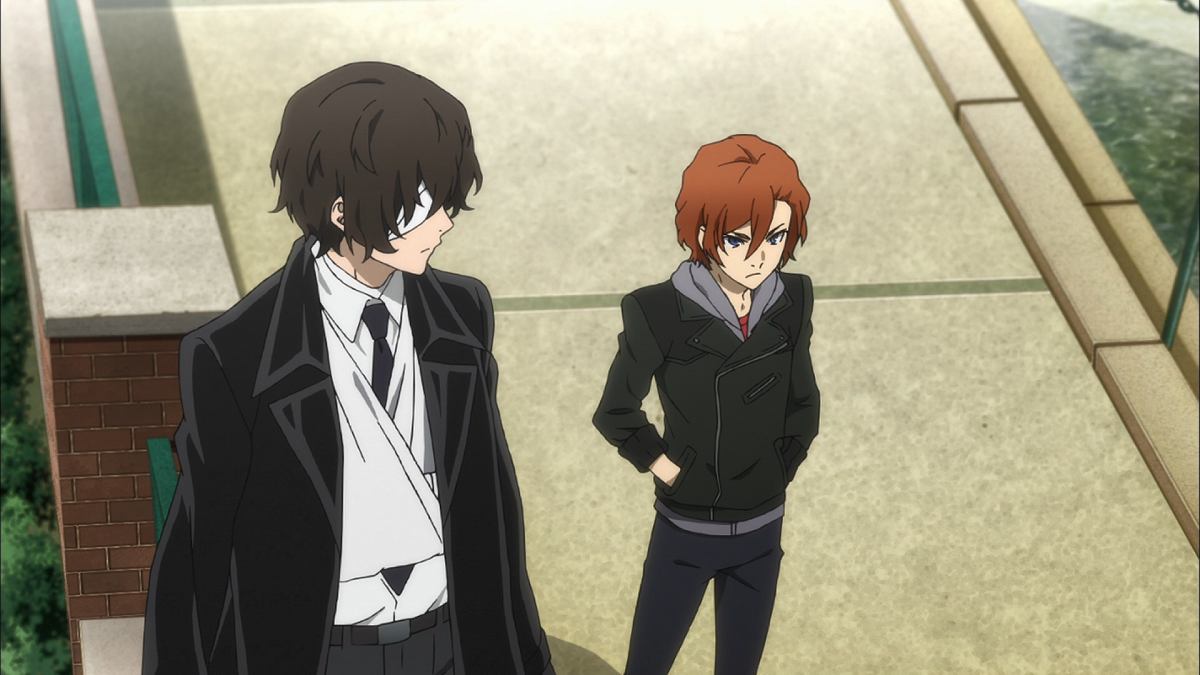 And y’know? I think the other thing that makes these season-opening flashbacks work so well too is that they are actually pretty damn interesting. Both so far have been more or less Dazai-focused—or rather what I mean by that is that he is the endearing character who we get to see in these flashbacks, and in each of them we get to see a little more of who Dazai used to (still might?) be. While they tell the stories of other people, those people directly interact and are affected by Dazai throughout the flashback. So, for me, an avid Dazai lover, and an avid lover of the darker Dazai, these flashbacks are gold. Season 3’s flashback I thought was also interesting, being Chuuya centric and showing not just his relationship to Dazai, but also how he ended up in the Port Mafia. The entire thing was really well done, and the final confrontation where Chuuya and Dazai worked together in fighting was excellent if just a little short.

But getting away from the flashback, episode 4 jumps straight into (no not our main characters) our main villain. And let me say, he is GREAT. Fyodor is revealed to be the one responsible for hacking the remote of the Moby Dick and nearly causing it to crash into the city last season.

And episode four is dedicated to showcasing just how formidable Fyodor is going to be. He sets up a cunning ploy against one of the Port Mafia’s executives and does it so seamlessly.  Despite having yet another episode without my homeboy Atsushi in it, I found I didn’t mind at all. This was a wonderful set-up for a villain and I think he’s really going to challenge the Armed Detective Agency this season. I’m still too early in the season to say for certain, but I think Fyodor might be the best villain yet.

And lastly, I want to touch on the fifth episode where we finally see Atushi and the gang.

It certainly gets off to a slow start, and it’s very much the same thing to be expected of a BSD episode but it’s still good. The humor of it is very welcome after that heavy backstory and decidedly non-humorous introduction to Fyodor. Plus we also still get to see them being badass for a hot second. If anything, getting into the thick of this season’s plot is super refreshing. I honestly look forward to seeing where this season will go.

So, overall, if you’ve watched Bungou Stray Dogs, you’re probably already watching this season, if not—definitely check it out! It’s been super entertaining and it has a complete banger for an opening theme. If you have watched this season, let me know what you thought in the comments below! Til next time, these have just been my first impressions.

One thought on “Who let the dogs out again?: First Impressions – Bungou Stray Dogs season 3”