Yes. There are characters in this anime called Thors & Floki, which honestly sounds like the worst band ever. Hey everyone, it’s Luna back with our normal programming and today we’re going to talk about Vinland Saga. So let’s get into it!

Now, I’m only about two episodes into Vinland Saga, which arguably means that I’m not even into the good part of it yet. The main character, Thorfinn, who looks like the most badass seafaring teen ever (sorry Sinbad), isn’t even a teen yet in the episode I’m  currently on. But I’m already fairly impressed, if not making constant jokes about Thors and Floki (seriously they sound like offspring from a Thorki fanfiction), with the anime.

The first thing that really got me about Vinland Saga is that it’s ACTUALLY a saga. This first part of the anime is essentially the origin story of Thorfinn. 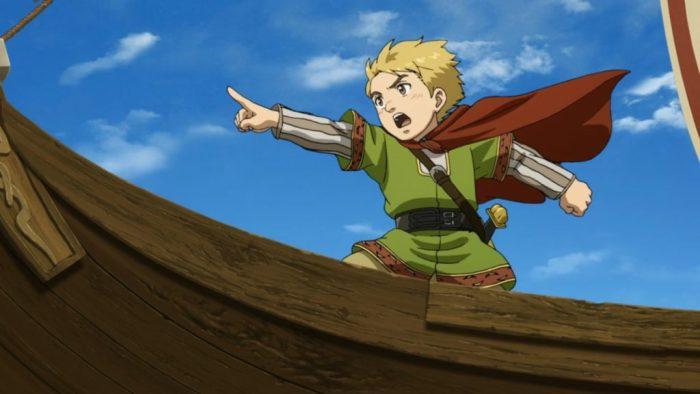 It begins with him as a mere child and showcases the world in which Thorfinn grows up, and more importantly, I’m 100% sure it’s telling the story of how Thorfinn’s father dies (which NO is not a spoiler—it’s legit in the description that it’s a revenge story after his father dies). So basically, it’s starting out in not only a great place, but it’s also spending the time to really flesh out Thorfinn’s life before the tragedy hits. In fact, it also seems like his father, Thors is the main character in these first two episodes. We get to see his ideals, how he treats his people, and how he treats his family. And to be honest? He’s a fucking daddy. Like yes please, right on up there with Gladdy daddy. Thors seems like a pretty awesome character, and I’m certainly feeling an attachment to him (which is sad because he’s probably going to die in the next episode). Spending so much time on this chapter of Thorfinn’s life is also really good for seeing his growth, and how he will become the main character who we’ll follow throughout this story. I find it super interesting to see the little things he does as a kid that makes e wonder if it hints at a tendency he’ll have when he grows up (for instance, he is quick to violence to prove he can be a warrior and this will stubborn recklessness will surely be something he keeps with him as he pursues revenge). Overall, seeing him as a child and seeing his father alive is just delightful.

As for actual animation?

I actually kind of like it. It’s not super amazing or anything, nor are there any particularly stunning scenes or backdrops yet, but it’s good. If anything is impressive of it, I’d say it’s the use of CGI for the battle sequence aboard the ships. I’m not usually a huge fan of CG sequences, but this one really well done (well, as far as I could tell). The direction of each shot during the sequence was exciting and well thought out, which only helped to showcase the actual battling (there’s a moment where you follow an arrow’s path to its target that was just perfection).

So aside from liking the way it begins, and thinking the CG battle sequence was pretty cool, the only other thing that I’m super loving right now are the characters. Too bad I think some of them are going to die since we’re still in backstory mode. We have Leif Erikson, who I greatly enjoy seeing in this anime (but also I can’t get that stupid scene from Spongebob out of my head “happy Leif Erikson day!”); Thors, who is a total dad and just a beautiful human being; Ari (I think it’s Ari) the overenthusiastic teen who wants to go to war; and,

is alright but to be honest him as a kid isn’t selling it to me yet. But it’s okay, he (unlike some of the others on this list) will have more time to grow older. I can only hope he’ll be like his dad. But he probably won’t. But still I want to see this cute little reckless and hyper kid who idolizes his dad, turn into this badass looking explorer who fucking dual-wields blades (watch our Kirito, Thorfinn is coming for you).

Overall, Vinland Saga is off to a great start. It seems like it’s going to have a strong narrative and solid storytelling, decent animation, and a main character who will grow throughout the tale (both emotionally and literally). There are a lot of fun references to Norse mythology that have been briefly mentioned that I think are really cool to add in. Plus we even got a glimpse of North America—er, I mean Vinland. But of course, I am expecting this to get really brutal, as the antagonists seem to be the Vikings (and I think we all know how violent Vikings were). Still, I have high hopes for Vinland Saga and I definitely recommend you check it out. If you are watching it, what do you think? And also do you like Thors as much as I do? Let me know in the comments below!