I’m going to say it right off the bat. SPOILER ALERT.

This past Tuesday the final DLC for Final Fantasy XV, Episode Ardyn, was released. Being the nerd (and FFXV addict) I am, I had my brother purchase it with my credit card and download it so it was ready to play upon getting home from work. And then I played it, and y’know? I never though I’d enjoy playing Ardyn as much as I did. And when I say that I mean the game play which was incredibly OP.  But I guess that makes sense considering Ardyn is literally immortal. There really is no way to die, and I didn’t even get close to it throughout my entire playthrough. Why? Because when Ardyn runs out of health he enters into extreme overpowered mode that you just need to live through long enough for his health to reset. Furthermore, he has all of Noctis ‘ abilities from warping to summoning, to armiger, AS WELL AS a strange like shadow-slide that effectively lets you cover distance extremely fast AND also a finishing move that basically demonifies the enemy. Su-fucking-goi. Like, I know all these powers make it ridiculously easy, but also it makes it incredibly fun. And that’s just the mechanics.

The actual story? Well, I hate to say I thoroughly enjoyed that as well. Episode Ardyn, while failing to answer who Izunia was, did wonders to Ardyn as a character as it created so much more depth into him. It walked us through how Ardyn went from being a healer, to being the crazy motherfucker we know in FFXV (with supplemental

information from the Episode Ardyn prequel anime). To make long story short, Ardyn used to take the starscourge into himself to heal people but in doing so tainted himself though he tried to keep it under control. Aera, his love interest and oracle (btw, I hate that Aera and Ardyn had more love scenes than Luna and Noct. COME ON SQUARE. I just wanted one date scene) one day told Somnus that Ardyn was chosen by the crystal to be king and one thing led to another, Somnus killed Aera, Ardyn let the scourge into him and then got rejected by the crystal, then Somnus locked him away. WHOO. And that’s the anime.

So the game picks up with Verstael, aka creepy Prompto with the incredibly deep voice, finding Ardyn and bringing him to Niffleheim where Ardyn can’t really remember what happened to him in his past (and I mean, if I was locked up for hundreds of years, I wouldn’t recall either). We get backstory on how Ardyn became contracted with Ifrit, but also glimpse that even now, Ardyn had some respect for the gods as he prayed to them in thanks for food. But he still subjugates Ifrit in want of revenge against Somnus who clearly haunts him. In a dream of Aera, the oracle tries to take the blame for what happened, saying that she was the one who told Somnus of the gods’ choice, but all Ardyn can see is revenge against Somnus who took everything from him. And in the dream Somnus forces Ardyn to kill Aera himself in a scene that is brilliant and frustrating. Why? Because it’s one of those moments where it instructs you to button mash and you do, and gives you the hope of being able to control that moment–only for the bar to deplete when you almost get it full, and for Somnus to help Ardyn drive the knife into Aera. I feel like in that moment my reaction was the same as Ardyn’s himself which REALLY UPSETS ME actually.

Anyway, that brings us to the main plot where we get to play Ardyn infiltrating founders day in Insomnia under Verstael’s orders. Being able to play Insomnia in daytime is a fucking dream. I’ve waited so long to explore the crown city in it’s glory and it feels bad that not only is it happening in episode Ardyn, but I also really want to destroy pieces of the city. Like, the more founder’s day items you wreck the higher your score in the DLC is…soooo….RIP this beautiful city. There’s also some fun little things scattered throughought the city–camps where we get to see Ardyn lounging and reading a magazine, building jumping which is so much fun, and also a nifty hat shop where we can buy new hats for Ardyn (this is the best little thing to add). It all brings some good natured fun to get your mind off the fact you’re playing the bad guy.

Until you get to the citadel. Where you have to fight young Regis. I’m sorry. I meant where you have to kick young Regis’ ass. I was so conflicted during that fight like you wouldn’t even believe. I’d knock him down and be like “yes! I mean NO! Wait no I don’t want to fight Regis. Fuck”. But at the same time, I really wanted to see Ardyn break Regis’ legs

and have that be the reason he needs a cane in the future (didn’t happen. Also realize how much I would’ve hated if that happened). Then the final fight against Somnus is something I could totally get on board for and thoroughly enjoyed. Until we come back to Regis where Ardyn nearly stabs him only for Bahamut to stop him. And THIS my friends…is where it gets interesting.

The final bit of story in Episode Ardyn, is basically Bahamut telling Ardyn that he was no longer chosen to be king and instead he had a new calling. This calling was to reign darkness on the land so that when the chosen king was born, he would clear the darkness with his light. And in doing so, he would free Ardyn of his immortality, but also die and end the Lucis Caelum bloodline. Ardyn, was to simply be a sacrificial puppet, like Noctis, that would serve his purpose to cleanse the world of demons. I mean he’s still a dick but he was a SACRIFICIAL LAMB. He was being raised for slaughter to die at the right time. WOW. JUST WOW. So that’s a big revelation right there. The Gods were calling the shots all along and everyone in the story of FFXV were being dragged along by the will of the Gods. Naturally, Ardyn is LIVID. Then you get to choose whether to defy or submit to fate. 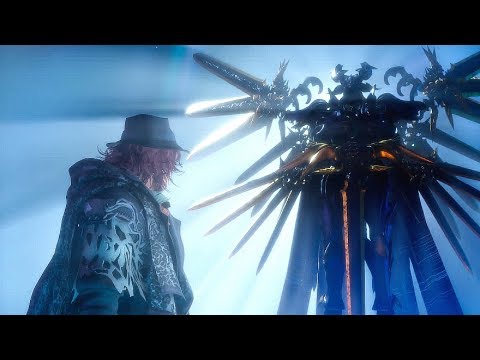 Naturally I would say resist, but all that does is cause a nice cut scene of Aera STABBING Ardyn time and time again before telling him, resistance is futile. And it is then. Right then. That Ardyn truly falls fully into depravity. He gives up on his gods, he gives up on humankind, he gives up on EVERYTHING and decided to try to kill the chosen king (Noctis) and let darkness reign upon the hellhole that is earth. Because he realizes nothing matters, not a damn choice MATTERS because it was preordained by the Gods. My mind is kind of blown thinking about this in the context of the game.

For instance, throughout the game there are times where we’re given choices like an otome game, and it makes you wonder if those will effect the story, but they don’t. The plot will still move in the same way to the same ending where Noct dies. Then there’s the Omen trailer where it’s implied that Regis sees Noct go on his journey alone and how he kills Luna and all these terrible things happen but Noct still dies. Regis then closes the trailers with the words “May the Gods forgive me” and we are left wondering for what? Now, knowing what I do, I think he was asking the Gods to forgive him for trying to defy the fate he foresaw. He sent the bros with Noct in an attempt to divert that future, and while the game didn’t happen the way we saw in the trailer, Luna still died. Noctis still died. And countless others were sacrificed and hurt along the way. But the Gods still got what they wanted and what they said would happen. And then the whole ending of the main game took on such a darker turn. The dialogue where the credits role is the same as it was at the beginning, and back when I first played I thought that maybe it’d be implying that the cycle was restarting and that maybe in some alternate universe if different choices were made a happy ending would come about. But now…now it’s almost like saying it didn’t matter how many times it happened, there was no defying the Gods (except apparently in episode Ignis who has an almost fan-fictiony alternate ending).

So wow. I’m just…I don’t know what more to say. Episode Ardyn was surprisingly emotional and fun to play. It brought on a whole new edge to the story and one that closes the books on FFXV (well, the game at least. Apparently a light novel may come out?). I have to say, for all the flaws in it, I love this game. I love this game to a T. I love the game play, the characters, the story, the music, the raw emotion. It has been a wonderful adventure to go on. But that’s just my opinion. What do you all think of FFXV and episode Ardyn? Let me know in the comments below!