Hello all and welcome to Otaku Thursday! Today we’re going to be going back to first impressions for the season! I must admit, I’m a little behind on anime right now, but I recently started watching something that I was kind of dreading to be honest: Sword Art Online. Now, don’t get me wrong—I don’t hate SAO. I’m not a huge of fan of SAO, in fact I think I’m a bigger fan of SAO abridged, and I think the series was a little over-hyped, but I do find parts of it enjoyable (Mother’s Rosario. MOTHER’S ROSARIO). But it’s also so hyped, it’s hard for me to ignore entirely. So when season 3 came out, I decided to watch it, and boy am I glad I did. Let me tell you why.

First off, I’m going to go ahead and say right now that when it comes to the tech in SAO, I like to ignore their “science”. Half the time it’s hard to follow what they mean, most often it makes little sense, but hey—it’s a fantasy, it’s not going to. So forgive me if I use the wrong term as I write and please correct me in the comments (like please someone explain to me fluxlights).

ANYWAY, this season starts out with a forty-eight minute episode (ugh kill me already).  The first portion of this deluxe episode was actually about…a young Kirito? In a virtual world. Kirito has two friends in this world: Eugeo and Alice, and they act like they’ve all grown up in the village the story starts in. It’s definitely…strange. As you watch, you’re like “duh this is SAO, Kirito is clearly in a virtual world”. But then at the same time, 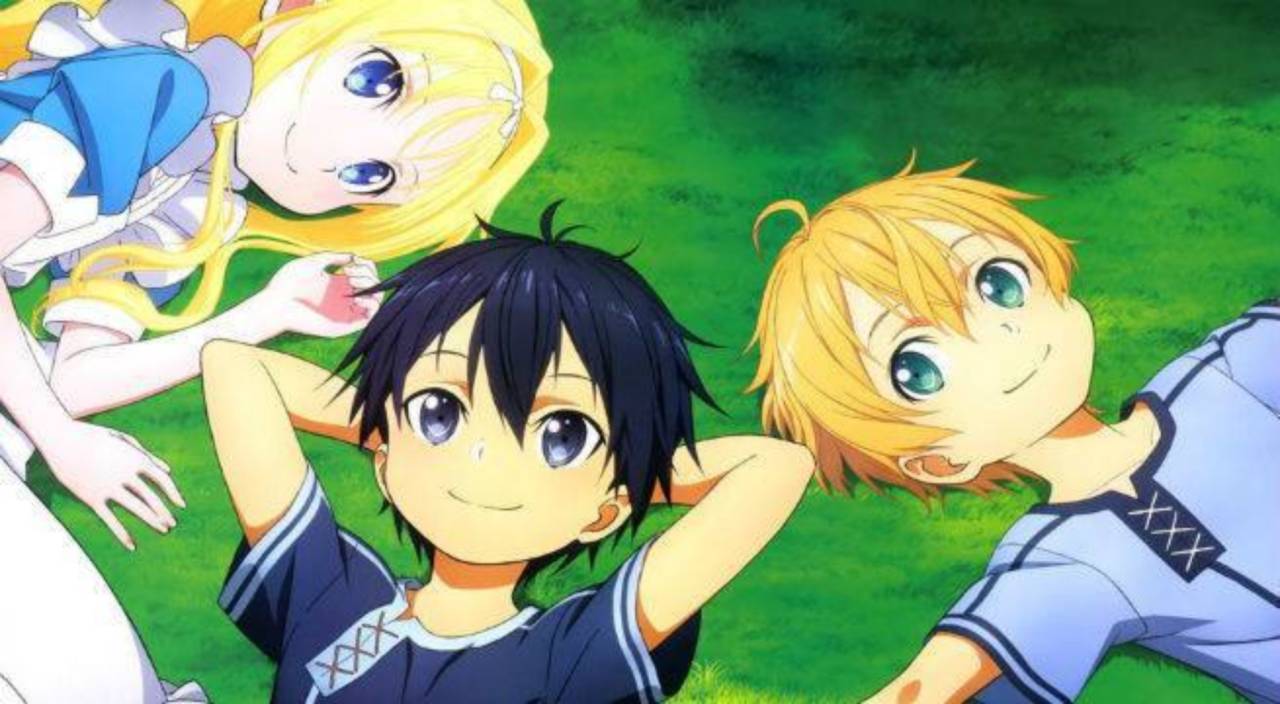 none of the characters, including Kirito, ACT like they are. In fact, they act like this world is their home—and again, Kirito is a CHILD. Why would he play a kid as an avatar? (is basically what I was asking myself). So instead I watched through this story, watched as these kids went on a journey to find ice in cave, got lost, one of them accidentally crossed into the dark land (which is apparently against the taboo index—which is basically a fancy term for the rulebook) and then got taken away by an integrity knight (LOL fun name for the mods).

It as it this point, Kirito shoots up in a lab (RIGHT when I was getting into this story). And then we’re back to Gun Gale (CAN WE PLEASE STOP WITH GUN GALE? It was like the worst arc in my opinion). I thought the whole kid Kirito virtual world was getting too good to be true. But I was still wondering what the hell it was. Well, luckily the episode decided to answer that. Apparently, Kirito had been spending his time testing out a new full-dive system called the soul translator (did anyone else burst out laughing at the name? Just me? Okay this is how you know I normally don’t take SAO seriously). According to him, this device makes the most realistic VR ever, and tricks the brain into thinking the virtual world is real. More importantly, when you’re in the game, you can’t remember you’re real life, and in real life you can’t remember what happened in the game. So it’s literally like living two different lives (am I the only one getting black mirror vibes? This honestly sounds like such danger). But you know what? This concept is actually really compelling to me. Far more compelling than simply a game where someone can never log out and dies in real life if they die in the game. Or one where they fight a tournament and die in real life when a bad guy kills them in game. So I was all for it.

But the best part of this episode came in the last five minutes. No that’s a lie it was like the last minute before the ED (OP?) song. Now, first off, did anyone finish Gun Gale arc? Okay so for those of you like me who didn’t, one of the people behind the Death Gun character (yes there were multiple) got away. It’s something that they mention briefly about ten minutes before, and comes into play real fast. So this guy, this ex-laughing coffin, ex-death gun guy shows up and stabs Kirito with the death weapon (though Kirito managed to knock him out at the same time he was hit with the death gun and collapsed). As the credits played I died—much like Kirito. FINALLY. Finally Kirito was no longer un-touchable.

Which I’m going to be completely honest, was completely delightful. While it’s obvious Kirito isn’t going to actually be dead, I found this an amazing twist. Especially when next episode he’s back in the virtual world that started the season, except older, and of course, confused as to how he got there and also having to convince himself it wasn’t reality because of how realistic it was. See, already I like how this is probably comparative to Mother’s Rosario. I bet Kirito is somewhere in the real world literally on the edge of death or in a coma while he’s in the virtual world. He just doesn’t know it. DAMN this is already compelling and it’s only episode two.

Over the next few episodes I watched of this, I found myself liking SAO more and more (shocking). It began to display qualities of Kirito that I found…delightful? I mean, stick with me, but Kirito has always been a bit of a Mary Sue. He’s surrounded by a harem of girls, he’s amazing smart, and always amazing and ALWAYS OP. He’s…not the most interesting character. However, season 3 has already made me approve of him much more. Not only do they give him a male character, (best boy Eugeo) to interact with,

they also show moments where Kirito actually ISN’T the best. He gets injured by a simple goblin, he can’t even do as much damage to the demon tree as Eugeo can, he’s confused and alone in this game, and he’s just…more interesting to watch interact in this world. I only worry how long this can last.

Now onto the last thing I’m going to mention: Why do I think this season will be better than the rest of SAO? Well, for one, the first two are very uneven in how interesting they are. Second, this season has placed Kirito in such a different environment that he’s used to that it’s fun to see him more…human. Third, Eugeo is best boy and gives Kirito a non-female addition to his harem (and gives Klein company in said harem). Fourth, the animation in this season seems to have improved. Fifth, with Kirito down for the count in the real world, this might mean Asuna will get some screen time IRL. Sixth, the soul translator is actually extremely compelling and could make for an interesting season. Seventh, the opening song is lit And finally, this is going to be the longest arc yet. It took up nine volumes in the light novel and is set for four cours, which is basically about 48-54 episodes of anime. Being the longest hopefully means that this season is going to be the most well-thought out and hopefully the best paced entry in the SAO series. With such a long season, this should give ample time to explain parts of the plot that would probably be brushed over in shorter seasons. And best of all, it means the arc will probably end properly (and not 25 floors early).

So final thoughts: what is the difference between an odachi and a talward? Well an odachi is a bit longer so it has more reach (fun fact: I learned that from SAO abridged). I’m hoping that Season 3 of SAO is like the odachi, and I hope it’s longer run makes it better and more effective. For once, I actually look forward to Sword Art Online.

So what do you guys think? Are you on board for SAO or not so much? Let me know us know in the comments below! Until then, these have just been my first impressions.

One thought on “An Odachi vs. A Talwar: SAO Alicization is gonna be BETTER than it’s first 2 seasons”